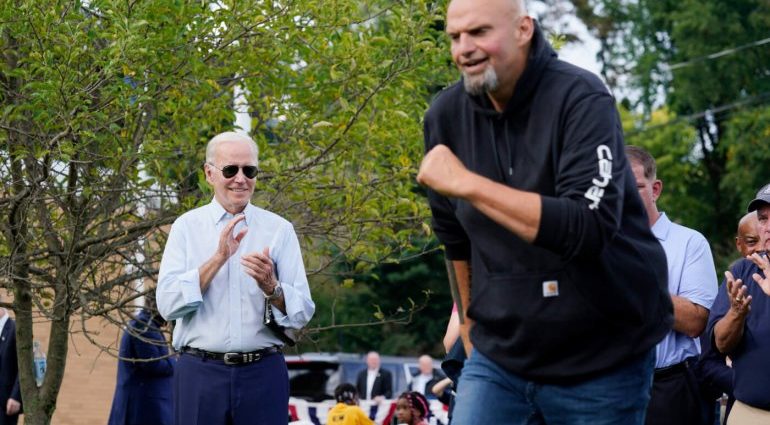 Amazingly, Joe Biden campaigned Saturday in Pennsylvania for tragic stroke victim John Fetterman. It was at least the second time one cognitively compromised man turned out to support another in as many weeks.

The memes practically wrote themselves, between our superannuated President’s incoherent, dementia-addled speech patterns paired with with those of noted word salad chef Fetterman.

Grandpa Joe…America’s voice of clarity. (Fair warning, not responsible for your device if you’re sipping a beverage while watching this…)

One thing is for sure. If John Fetterman is elected, he — or his wife — will be a reliable vote vote to ban America’s favorite rifle, the AR-15 and the standard capacity magazines that feed it.

Breitbart has the details . . .

Biden said, “But here’s the deal: Public safety is why John got into public service in the first place. Oz won’t do a thing about guns. But John Fetterman will veto — with your votes, John Fetterman will be in the Senate and be able to help me add one more thing — what I got done when I was a senator: ban assault weapons.”

He continued, “Ban them! Ban them. Ban them. They have no place in America.”

Meanwhile the Fetterman campaign has been, well, entertaining of late.

As Pennsylvania Democrat Senate candidate John Fetterman talked about how proud he was of “sedition free” President Biden, the flags on the stage were blown over. pic.twitter.com/d0idqQod4G

Despite Fetterman’s impairment, the race couldn’t be closer.

2022-11-07
Previous Post: r/guns – Musket Monday, Vietnam style!
Next Post: r/guns – Got a good deal (I think) on this post-war M1 carbine that belonged to my friend’s father. Anything to look out for?