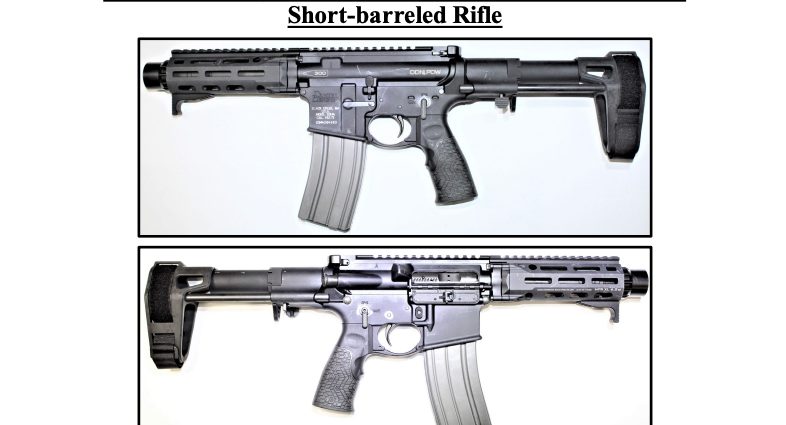 Our dear friends at the ATF chose Friday the 13th in the run-up to next week’s SHOT show to announce their final rule on the use of pistol stabilizing braces. Basically…you can’t. Maybe what we love the most is the firearms regulators’ assiduous use of scare quotes around the term “stabilizing braces” to let us know that wink-wink these things are really stocks and we’re lucky they haven’t just outlawed them altogether a la bump stocks.

You can read the full rule here.

We haven’t had a chance to read through it in detail yet (it’s 293 pages long) to determine in what limited instances stabilizing brace use will be deemed acceptable. But from a quick skim and a look through the examples of firearms that are now — with a waive of the ATF’s regulatory magic wand — officially considered to be short-barrel rifles, the number of covered firearms the rule excludes is far more extensive than indicated by the guidance that was provided last year.

See them here. And here. In other words, almost any AR and AK-style pistol — even if only equipped with iron sights…forget optics with long eye relief — appears to be covered here, requiring either registration as a short-barrel rifle, removal of the brace (and rendering it unusable) or removing the current barrel and replacing it with one that’s at least 16 inches long.

NOTE: During the 120-day period that begins when the rule is published, those choosing to register their newly deemed short-barreled rifles will be able to do so without being required to buy the $200 tax stamp.

Oh, and, to be clear, the rule doesn’t just apply to AR and AK type pistols. That’s one of Black Collar Arms’ bolt action Pork Swords (disclosure: Black Collar is co-owned by our own Jeremy S.). It’s now considered a short-barrel rifle too, as long as it has a stabilizing brace attached. The same with similar brace-equipped bolt guns such as those from Remington, Q, and Christensen. Also, note this bit of wonderfully contradictory word salad the ATF crafted in its statement announcing publication of the rule (full statement below) . . .

The rule should be published in the Federal Register in the next few weeks. Here’s the ATF’s full statement . . .

On January 13, 2023, the Attorney General signed ATF final rule 2021R-08F, “Factoring Criteria for Firearms with Attached ‘Stabilizing Braces,’” amending ATF’s regulations to clarify when a rifle is designed, made, and intended to be fired from the shoulder.

The rule outlines the factors ATF would consider when evaluating firearms equipped with a purported “stabilizing brace” (or other rearward attachment) to determine whether these weapons would be considered a “rifle” or “short-barreled rifle” under the Gun Control Act of 1968, or a “rifle” or “firearm” subject to regulation under the National Firearms Act. The rule’s amended definition of “rifle” clarifies that the term “designed, redesigned, made or remade, and intended to be fired from the shoulder” includes a weapon that is equipped with an accessory, component, or other rearward attachment (e.g., a “stabilizing brace”) that provides surface area that allows the weapon to be fired from the shoulder, provided other factors, as listed in the definition, indicate the weapon is designed and intended to be fired from the shoulder.

This rule is effective the date it is published in the Federal Register.  Any weapons with “stabilizing braces” or similar attachments that constitute rifles under the NFA must be registered no later than 120 days after date of publication in the Federal Register; or the short barrel removed and a 16-inch or longer rifle barrel attached to the firearm; or permanently remove and dispose of, or alter, the “stabilizing brace” such that it cannot be reattached; or the firearm is turned in to your local ATF office. Or the firearm is destroyed.

Again, you can read the ATF’s newly announced rule here.

EDIT: this is the most relevant summary we’ve come across in the document so far (still reading, though):

All previous ATF classifications involving “stabilizing brace” attachments for firearms are superseded as of [INSERT DATE OF PUBLICATION IN THE FEDERAL REGISTER]. As such, they are no longer valid or authoritative, and cannot be relied upon. However, firearms with such attachments may be submitted to ATF for reclassification.

(i) whether the weapon has a weight or length consistent with the weight or length of similarly designed rifles;
(ii) whether the weapon has a length of pull, measured from the center of the trigger to the center of the shoulder stock or other rearward accessory, component or attachment (including an adjustable or telescoping attachment with the ability to lock into various positions along a buffer tube, receiver extension, or other attachment method) that is consistent with similarly designed rifles;
(iii) whether the weapon is equipped with sights or a scope with eye relief that require the weapon to be fired from the shoulder in order to be used as designed;
(iv) whether the surface area that allows the weapon to be fired from the shoulder is created by a buffer tube, receiver extension, or any other accessory, component, or other rearward attachment that is necessary for the cycle of operations;
(v) the manufacturer’s direct and indirect marketing and promotional materials indicating the intended use of the weapon; and
(vi) information demonstrating the likely use of the weapon in the general community.

We haven’t yet come across what ATF means by “consistent with,” what they consider enough surface area to function as a stock, what “indirect marketing” means, or how they plan to hold a manufacturer accountable for the “likely use of the weapon in the general community” if that use is contrary to the manufacturer’s design intention, marketing, and stated purpose.

EDIT: Under this guidance, there are no pistol grip shotgun-style firearms that are acceptable with a brace, as none of those firearms are intended under the definitions of the Gun Control Act to be fired from one hand and, therefore, the brace has no purpose. These guns are now viewed as Short Barreled Shotguns, which are NFA-regulated. Needless to say, in our opinion just because these shorty, stockless “shotguns” fall into a catch-all definition of “firearm” under the Gun Control Act and that definition doesn’t state “designed to be fired from one hand” doesn’t mean a disabled user who must fire it only from one hand cannot benefit greatly from the employment of a stabilizing brace. Anyway, here’s the relevant text from the doc:

The NPRM explained that the proposed criteria and worksheet did not apply to firearms commonly referred to as “pistol grip shotguns,” as they were never designed to be held and fired using one hand (e.g., Mossberg Shockwave, Remington Tac-14).72 See also 86 FR at 30828–29.

As discussed in section II.B of this preamble, these firearms are specifically designed to be fired with two hands. ATF has always classified these weapons as “firearms” under the GCA, and not as “shotguns,” because they do not incorporate a shoulder stock and are not designed and intended to be fired from the shoulder like a shotgun. Nor has ATF classified these weapons as “pistols,” as they are not designed to be held and fired in one hand like a pistol. Thus, the addition of a “stabilizing brace” does not assist with single-handed firing, but instead provides surface area that allows for firing from the shoulder. Therefore, a “pistol grip shotgun” equipped with a “stabilizing brace” and a barrel of less than 18 inches is an NFA “firearm,” i.e., a short-barreled shotgun.