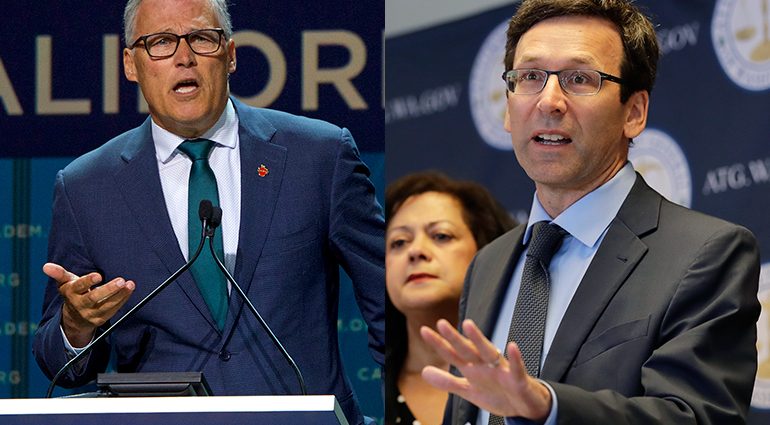 Washington Gov. Jay Inslee and Attorney General Bob Ferguson need a refresher course on the constitution; Inslee because he doesn’t know the difference between a regulated privilege and a constitutionally-protected fundamental right, and Ferguson, because he evidently believes Second Amendment rights are subject to public opinion polls, the Citizens Committee for the Right to Keep and Bear Arms said today.

“Maybe Jay Inslee should head back to law school so he can get it right,” said CCRKBA Chairman Alan Gottlieb. “Driving is a privilege. Recreational sport fishing is a privilege. But owning a firearm is a right protected by both the U.S. and Washington state constitutions. The notion citizens should need a license to exercise a right, and a permission slip from the police before they can exercise that right, is an abomination that clearly doesn’t pass the smell test.

“In his news release, Ferguson mentions two polls showing public support for a ban on semiautomatic rifles,” he added. “The attorney general should know that constitutionally-protected rights are not determined by the whims of opinion polls. Both the U.S. and Washington constitutions protect the right to bear arms. Neither says a thing about the type of arms, how they function or what they can, or cannot, look like.”

The Washington State Constitution’s Article 1, Section 24 states, “The right of the individual citizen to bear arms in defense of himself, or the state, shall not be impaired, but nothing in this section shall be construed as authorizing individuals or corporations to organize, maintain or employ an armed body of men.”

“Requiring a license and permit to purchase a firearm is clearly an impairment of the right to bear arms,” Gottlieb observed. “No other enumerated constitutional right is encumbered with a permit requirement. As Justice Clarence Thomas wrote in the Bruen decision earlier this year, ‘The constitutional right to bear arms…is not ‘a second-class right, subject to an entirely different body of rules than the other Bill of Rights guarantees’.”

“Inslee and Ferguson are grand-standing,” he continued. “They’re not talking about sending criminals to prison. They’re talking about restricting the rights of law-abiding citizens to create the false impression something is being done about violent crime, when it really isn’t. The Legislature should soundly reject these proposals.”