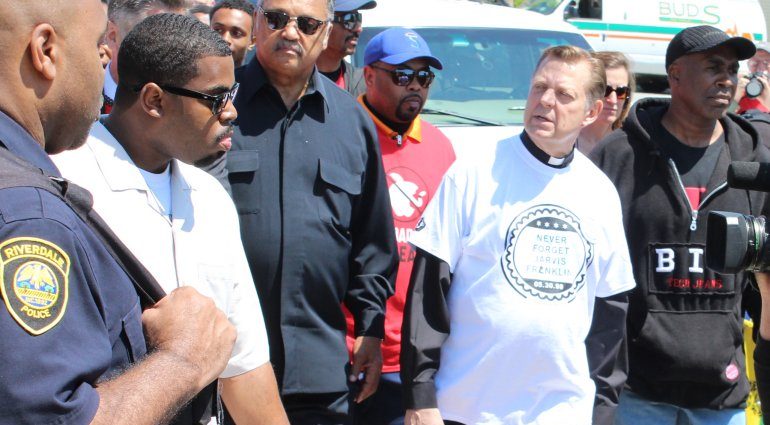 Pfleger has had quite a run at St. Sabinas. He recognizes the value of armed good guys with guns while lobbying relentlessly for the little people of his parish and the rest of Chicagoland to be stripped of their right to keep and bear arms.

Pfleger’s armed crew has had all manner of issues as well. One member was arrested for carrying without a license on the steps of Pfleger’s church.

Another former member of Pfleger’s detail was arrested after killing a shoplifter at a corner drug store.

Perhaps most remarkably, he offered a gun buyback for those under age 25 last year after the church supposedly cleared him of child molestation allegations. Really.

Father Michael Pfleger, fresh off a suspension related to allegations of sexually abusing multiple teenagers, has announced a new gun buyback at his St. Sabina’s Church in Chicago. The anti-gun cleric is paying good money too: $200 for handguns or “assault rifles” and $20 for magazines. Here’s the catch, it’s open to all…if you’re 25 years of age or under.

Now he’s facing yet another child sex abuse allegation. The New York Post is reporting on the latest complaint . . .

A controversial, anti-violence activist priest in Chicago who once caught attention for his relationship with former President Barack Obama is under investigation for another sexual abuse of a minor case.

The Archdiocese of Chicago announced Saturday that Father Michael Pfleger will be under investigation for a new allegation of sexual abuse of a minor said to have taken place more than 30 years ago, according to a statement.

“Father Pfleger has been asked to step aside from ministry and live away from the parish while the allegation is investigated. He has agreed to cooperate fully with this request,” Archbishop of Chicago Cardinal Blase J. Cupich said Saturday.

The allegation was reported to the Illinois Department of Children and Family Services and law enforcement officials.

Pfleger is no stranger to controversy. He once received condemnation for threatening to “snuff out” a federally licensed gun shop owner at an NRA protest led by the Rev. Jesse Jackson in Chicago.

We don’t want to speculate on the Catholic Church or its past history of covering up for child molesters (1 2 3 4 5 6 to name a few of 7.4 million responses found). We’ll wait for this latest investigation of the anti-gun parish priest to run its course.