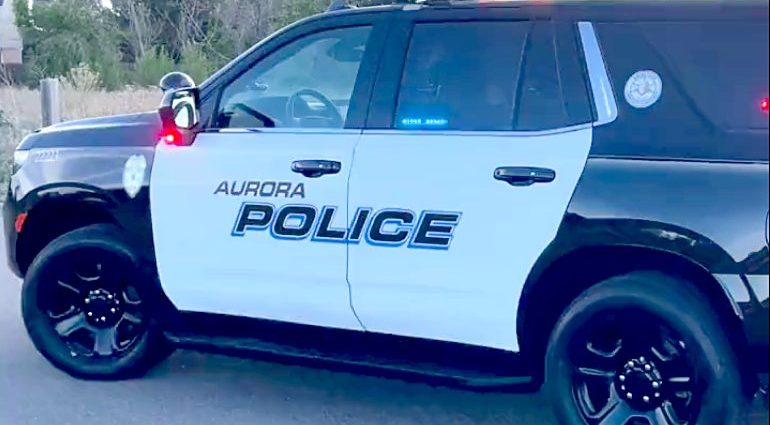 City of Aurora, CO Facing Liability for Police Shooting of Homeowner Holding a Gun Inside His Home [VIDEO]

The City of Aurora, Colorado faces a civil rights lawsuit for shooting a homeowner who holding a shotgun — by the barrel — within his own residence. The victim, Andrew Huff, claims that officers who were in plain dark clothes as they approached his home at night, only identified themselves as they opened fire. Huff took a round to the rectum.

Now he’s the one firing legal shots at the cops involved as well as the City of Aurora.

A blistering federal magistrate’s “Report and Recommendation” in Huff v. City of Aurora, paints a damning picture of excessive use of deadly force by the officers. It recommends rejecting their claims of qualified immunity given their apparent unreasonable actions when assessed under the Graham v. Connor precedent, and by other facts in the case as well.

The judge’s report also criticizes the City of Aurora for a lack of training of their officers in de-escalation and how to respect homeowners and their right to possess guns in their homes.

What’s more, by backing the officers’ actions in Huff’s case — as well as a similar 2018 case in which the APD shot and killed a homeowner standing inside his home, the suit suggests the city effectively encouraged such unconstitutional behavior.

Eugene Volokh does a deep dive on the case at his Volokh Conspiracy blog . . .

At 11:30 p.m., Officers Ord, Marrero, and Oviatt, without any advance notice to Mr. Huff, went to Mr. Huff’s home. They parked around the corner and, wearing all black clothing, proceeded to “creep” through neighboring yards towards Mr. Huff’s residence. When Mr. Huff, who was smoking outside, saw these unidentified individuals advancing upon his home, he believed that Mr. Bejar-Gutierrez was following through on his earlier threats. He ran inside and retrieved a shotgun. He was facing the window with both hands by his side. His left hand held the shotgun by the barrel—his finger was not on the trigger and the gun was pointed at the ceiling. About 30 feet away, Officer Ord drew his weapon and, as he yelled, “Put your hands up, put your hands up!”, fired five shots at Mr. Huff. Mr. Huff, who was diving away from the window as Officer Ord opened fire, was shot in rectum and severely injured. Another round entered the room where his daughter lay sleeping.

I am not a lawyer, but I know that courts generally take a dim view of police shooting homeowners standing inside their homes carrying or holding a legally-possessed firearm in a non-threatening manner. Furthermore, if the cops weren’t in uniform, concealed their approach and failed to identify themselves before firing, they have even less leeway to shoot first and ask questions later.

Volokh shares the magistrate’s in-depth analysis of the use of force by the cops. Spoiler: It doesn’t look good for the troubled Aurora PD . . .

Officer Ord attempted to justify his actions by exclaiming that Mr. Huff “came into the window with a gun,” and afterwards stated, “They are racking up in the garage,” when, in fact, Mr. Huff, bleeding profusely on the floor, was merely calling 911 for help. Mr. Huff was charged with multiple felonies, all of which were ultimately dismissed. The second is a claim for municipal liability brought against the City for its allegedly unconstitutional policies, practices, and customs.

So the APD filed multiple felony charges against the homeowner. Was that a little CYA on the part of the officers involved? It surely looks that way, given how prosecutors ultimately dismissed all of them. As for the city’s liability . . .

And the Magistrate Judge also concluded that municipal liability was possible here, because Huff “has sufficiently alleged that the City failed to train Officer Ord in the use of appropriate force when confronted with individuals exercising their Second Amendment right to keep bear arms in their homes, and that the City’s final policymakers ratified Officer Ord’s allegedly unconstitutional use of deadly force”:

Mr. Huff alleges here that “[n]ot only does Aurora have absolutely no training on shooting into residences or encounters with homeowners exercising Second Amendments rights, but it has also almost zero training on avoiding unnecessary escalation, and deficient training on proportional constitutional use of force.” If true, this demonstrates the APD’s deliberate indifference to its citizens’ constitutional rights, especially given how many American homeowners—exercising their well-established Second Amendment rights—legally own and possess firearms. Accordingly, at this early stage, Mr. Huff’s Amended Complaint plausibly states a claim against the City under a failure to train theory….  (Emphasis added)

Maybe the Aurora Police Department should have spent less time on critical race theory and diversity equity and inclusion training and more time concentrating and training officers on dealing with citizens who lawfully exercise their civil rights and protect their homes from violent criminals.

After all, they suspended the Aurora police union head after he criticized the diversity hiring practices of the city. From RawStory . . .

The head of the Aurora Police Union was suspended after sending a letter complaining about diversity requirements for the police department, local CBS4 reported Tuesday.

Aurora has been fielding several scandals that has ushered in a series of changes to the department.

“To match the ‘diversity’ of ‘the community’ we could make sure to hire 10% illegal aliens, 50% weed smokers, 10% crackheads, and a few child molesters and murderers to round it out. You know, so we can make the department look like the ‘community,’” the email said.

According to Mr. Huff, APD Chief Paul O’Keefe publicly supported Officer Ord after the shooting, stating that Officer Ord complied with APD policy and did nothing wrong. Mr. Huff further notes that former APD Chief Nick Metz publicly backed the officers who shot and killed Mr. Black in 2018. No officers were disciplined in either case. Mr. Huff argues that this amounts to ratification and is evidence of the APD’s unconstitutional policy of shooting at homeowners lawfully exercising their Second Amendment rights….

Chief O’Keefe’s failure to discipline Officer Ord after shooting Mr. Huff cannot, on its own, plausibly form the basis of municipal liability on a ratification theory. However, … “[a] failure to investigate or reprimand might also cause a future violation by sending a message to officers that such behavior is tolerated.” That is what Mr. Huff alleges here. He claims that after police shot and killed Mr. Black in his home, then-Chief Metz publicly stated the officers did nothing wrong and none of them were disciplined. Then, Chief O’Keefe, after “carefully review[ing] and analyz[ing] Officer Ord’s decision to shoot Plaintiff,” under circumstances similar to those that resulted in Mr. Black’s death, likewise determined that the officer’s actions were in line with APD policy. If the City’s final policymakers took affirmative steps to not merely condone but also commend the allegedly excessive and unconstitutional use of deadly force by APD officers, this deliberate conduct may be enough to establish the existence of an official informal policy, whatever the formal written policy may provide….

It looks as though the City of Aurora — which has had more than its share of problems with its police force — might want to break out the checkbook and see if they can make this go away in a settlement using taxpayers’ dollars. Because if this goes to a jury, it surely looks like Mr. Huff is holding all the cards.

2022-09-15
Previous Post: r/guns – Why would we have 2 hands if they weren’t meant for 2 guns
Next Post: r/guns – Couldn’t be happier with the way the Thompson Fore-Grip test went for my Ruger PCC. Now to print with some more infill and of course in Black.