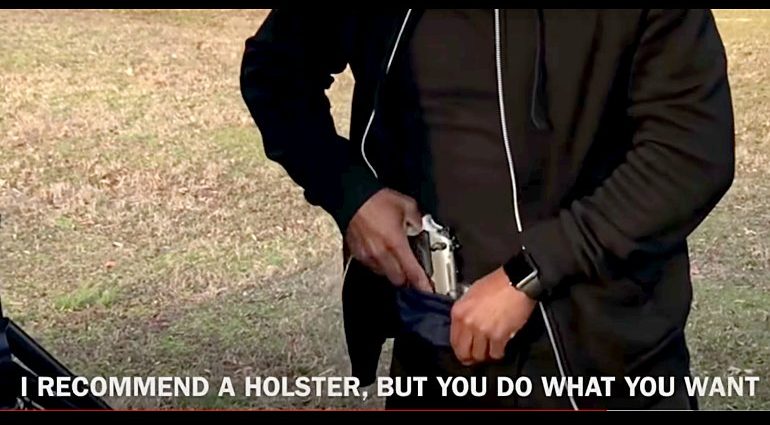 You’ve read the platitude in the comments a thousand times – play stupid games, win stupid prizes. The recent equivalent for a Florida man was, walk up to an innocent man in a car who was minding his own business, with a gun in your waistband, then draw and point the heater at the man while shouting at him.

A man in Tampa did just that and came away with multiple new piercings in the upper body which resulted in a premature death.

Cops say the legally-armed good guy in the car was parked in a friend’s driveway when a guy in his late 30s parked on the street out front, left his car after stuffing a handgun down his pants and walked up to the concealed carry license holder.

It turned out that the perpetrator’s gun was fake.  The intimidation moved failed rather spectacularly for the older man.

The Tampa Bay Times has the details . . .

A man fatally shot another man who raised what turned out to be a fake gun toward him at a home in Tampa’s Lowry Park North neighborhood, police said.

Officers dispatched about 11:30 p.m. to a call about shots fired on the 8500 block of North Hamner Avenue found a man in his late 30s suffering from gunshot wounds in his upper body, according to Tampa police. Officers provided first aid until Tampa Fire Rescue crews arrived and pronounced the man dead.

The shooter, a man in his mid-20s, stayed at the scene and cooperated with investigators.

Quick reminder: don’t “cooperate” too much with the police until your attorney is present.  Here are the quick and dirty rules for communicating with responding/investigating officers.

You have nothing to gain by answering detailed questions without your attorney’s guidance. In fact, while anything incriminating can be used against you in a court of law (where have we heard that before?), exculpatory evidence you share will be deemed inadmissible as “hearsay.”

Watch (or listen) to this video from Regent University School of Law if you want further explanation why it’s against your interests to talk with the police. The professor has quite a sense of humor and it’s entertaining as well as informative.

As for pointing fake guns at people late at night…it’s not the smartest idea.

2022-11-02
Previous Post: r/guns – Two nail drivers and a sledgehammer
Next Post: r/guns – Hello everyone, I had a quick question. What kind of .357 Mag round would you recommend for a hiking gun? Around my area there are mostly mountain lions and every so often a bear. I’m aware a larger caliber would be ideal but for the time being what would you guys recommend? Thanks in advance.