No ‘grand scheme’: Bill Gates responds to criticism on vaccines and buying farmland

Microsoft founder Bill Gates responded to an array of questions stating he believes the wealthy “should pay a lot more” in taxes and that he is not involved in a grand scheme regarding his purchasing of vast swaths of farmland in the United States.

Gates participated in an installment of Reddit.com’s popular Ask Me Anything for the 11th time recently. In an AMA, readers of the website submit questions and the notable person in question answers on the platform.

The question that got the most traction with viewers (based on votes) was regarding Gates becoming the largest individual owner of farmland in the U.S.: “Why are you buying up so much farmland, do you think this is a problem with billionaire wealth and how much you can disproportionally acquire?” a reader asks.

“I own less than 1/4000 of the farmland in the US. I have invested in these farms to make them more productive and create more jobs. There isn’t some grand scheme involved – in fact all these decisions are made by a professional investment team,” Gates explained before responding about his wealth, “In terms of the very rich I think they should pay a lot more in taxes and they should give away their wealth over time. It has been very fulfilling for me and is my full time job,” he concluded.

Gates also suggested raising taxes when a user asked how to make corporations pay “better wages” and “pay their taxes.”

“I am surprised taxes have not been increased more,” Gates remarked.

“For example capital gains rates could be the same as ordinary income rates,” the billionaire added.

Gates humorously replied to a vulgar question regarding the climate, responding that he feels climate change will slow human progression: “Climate: We f***ed or super-turbo f***ed?” the question reads.

“Climate will slow down the progress we make on improving the human condition but I still believe we can avoid a terrible outcome. The pace of innovation is really picking up even though we won’t make the current timelines,” Gates explained.

Another reader bluntly asked about Gates’ focus on vaccines and health care, a topic that has launched the computer mogul into controversy during the age of COVID-19. Gates responded saying that saving children and “giving back” was his top priority.

Speaking on technology, synthetic beef, and his greatest regrets, Gates answered additional questions before stating that he plans to give away all of his riches before the end of his life: “Everything I own will be sold as money moves into the Foundation.” 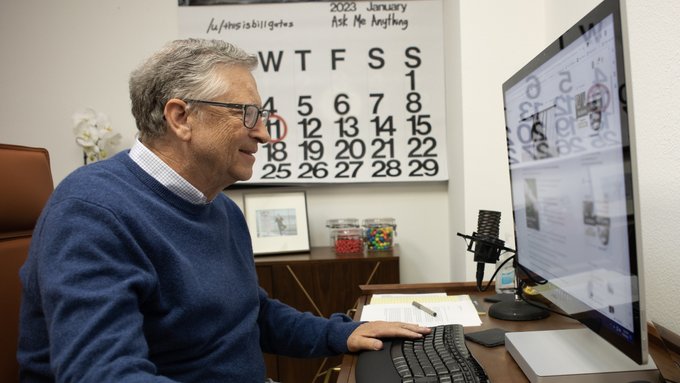 2023-01-12
Previous Post: You’ll Never Guess Who Has Realized That Gun Manufacturers are a Net Positive For Their Communities
Next Post: My LGS solution to the new AWB here in Illinois : guns