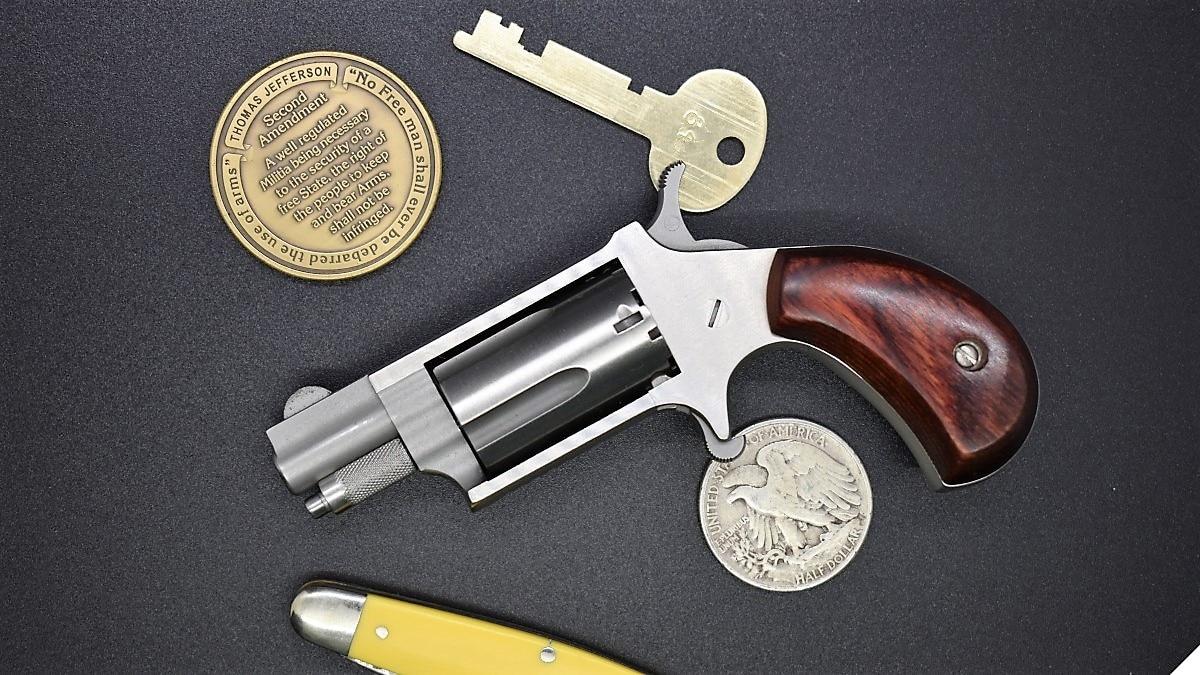 Small enough to fit into the “fifth pocket” of a pair of jeans, the modern mini-revolver has been around in one form or another for 50 years. (Photo: Chris Eger/Guns.com)

The father of some of the largest revolvers on earth also gave birth to a company that today makes some of the smallest wheel guns on the planet.

Formed originally in Salt Lake City around 1971 as the Rocky Mountain Arms Corp, the company that today is North American Arms was founded by a fella named Richard J. Casull, better known as Dick Casull. As in the father of the big ole thumping .454 Casull cartridge.

A gunsmith gifted with both exceptional intellectual ability and creative productivity, Casull was the holder of more than 20 patents including several filed in the 70s for small, single-action revolvers with a floating firing pin and an improved cylinder lock system. These small mini-revolvers were simple, using a 5-round removable cylinder that was held in place by a central knurled cylinder pin. While reloading was slow, requiring the pin and cylinder to be removed from the frame, it is easily accomplished. The mini-revolver only contains about 19 parts when you count all the internals. A basic field strip breaks the gun down into its frame, cylinder, and pin. (Photo: Chris Eger/Guns.com) Single action, the user has to draw the hammer back with the thumb, making sure it locks into the fully cocked (more on this later) position. This pops the spur-style trigger from its protective recess in the frame, making it ready to fire. (Photo: Chris Eger/Guns.com) When it comes to safety, the mini revolver uses a traditional half-cock system familiar to 19th-century wheel guns, allowing the handgun’s cylinder to be removed and inserted safely. The slots between each of the chambers of the cylinder allow the hammer’s blade to rest safely with the chambers fully loaded. (Photo: Chris Eger/Guns.com)

Casull’s RAMC was an interesting company, producing both large-frame .454 single-action revolvers alongside .22 rimfire mini-revolvers, with the latter being sold at the time for $69 (in 1971 greenbacks, about $435 today). Rocky Mountain eventually changed their name to North American Arms around 1975 while Casull later went on to found Freedom Arms in Wyoming, with NAA concentrating their efforts on mini-revolvers while the newer FA went on to produce more full-sized guns.

With that being said, FA made their series of mini-revolvers, deemed The Patriot, in the early 1980s. They were much the same and included an innovative belt-buckle-hosted revolver that did not cross into NFA territory as the handgun had to be separated from the buckle to be fired and was not concealed inside of it. They have proved popular in gun culture, showing up everywhere from movies to Donald Trump, Jr.’s IG feed. The Dick Casull’s belt buckle mini revolver has been around since the early 1980s, and NAA still produces the model today.

For the past 30 years, though, NAA has been *the* player in the mini-revolver game. All their wheel guns are made from stainless steel to some of the highest standards in the firearms industry.

Based today in Provo, Utah, they have expanded their line to dozens of offerings over the years to include a short-lived .17 HMR-chambered revolver, .22 Short, Long Rifle and Magnum guns; and others. NAA currently makes its mini-revolvers in a wide range of barrel lengths and calibers with different grips to boot. A common denominator is being single-action with all-stainless steel construction (Photo: Chris Eger/Guns.com) This NAA Magnum Convertable was offered with swappable cylinders for both the .22 LR and .22 WMR and sold as a combo between 2012 and 2015. Noisy cricket, indeed. (Photo: Chris Eger/Guns.com)

Going longer, revolvers like the North American Arms Earl, part of NAA’s 1860 series, which resemble old cap-and-ball wheelguns from the mid-19th Century but are still designed for modern .22 rimfire loads, are available. The Earl comes with either a 3- or 4-inch heavy octagon barrel, an increase in sight radius that can stretch these mini-revolvers out a bit. In the same vein are guns like the North American Arms Mini-Master, which have a 4-inch barrel, adjustable rear sights, a ramped front with a red insert, and an oversized (for an NAA) rubber grip. Weight of these guns is still under 11-ounces.

While they aren’t likely to be carried as a duty gun or used in ISSF Free Pistol competitions, mini-revolvers offer a lot of fun as recreational plinkers, snake charmers, coup de grâce guns for sportsmen in the field, or as a deep carry “get off me” piece where larger handguns cannot otherwise be carried.

Further, they are also conversation pieces and I can vouch that they get lots of attention at the range and have enticed more than one interested observer along for the ride to dip their toe into the pool of the shooting sports for the first time.