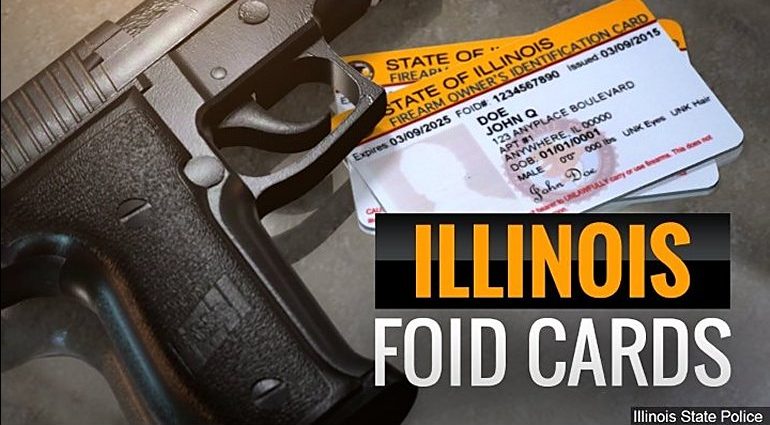 Illinois State Police Revoke FOID Cards Without Due Process; Gov. Hasn’t Nominated A Single Member For the FOID Appeals Board

Illinois remains a screwed up state, with politicians blaming law-abiding gun owners for the crimes committed almost entirely by gang members who illegally acquired their firearms.  Why, the politicians even redirect attention from the gang violence on our streets by calling it “gun violence” instead.  And now Governor J.B. Pritzker’s Illinois State Police, under new ’emergency rulemaking,’ are revoking FOID (firearm owners identification) cards for the thinnest of reasons.

As for those who have their FOID cards revoked, they have lost their fundamental constitutional right to keep and bear arms.  The FOID Appeals Board is set up to hear those appeals, however the governor hasn’t nominated anyone for the state review board that’s supposed to hear those appeals.  Without members, there can be no quorum.  Without a quorum, there’s no business. There’s no board.

This summer, in order to cover for the failure of the FOID gun control scheme to prevent the Independence Day massacre in Highland Park, the Illinois State Police filed for emergency rulemaking to allow them to revoke FOID cards more easily. WREX had a story back in July about the change that explains it nicely.

SPRINGFIELD, Il. —The Illinois State Police (ISP), under the direction of Governor Pritzker, submitted an emergency rule change to the Illinois Secretary of State’s Office implementing broader use of clear and present danger reports that can bar applicants from receiving a Firearm Owners Identification (FOID) card or revoke a current FOID card.

The rule change allows for the use and maintenance of historic clear and present danger information even if the subject was not actively seeking or holding a FOID card at the time a Clear and Present Danger report was made and allows for use of these reports in possible future evaluations.

So, “allowing” the ISP to “consider a broader range of information” has been aggressively used by J.B. Pritzker’s state cops to revoke a whole lot of people for stuff ten, twenty and even thirty-plus years ago.  Some might even say they’re abusing their newly created “authority.”  How, you ask?

How about the fact that a Decatur, IL police officer, recovering at home after being shot in the line of duty early this year, got one of those revocation letters.  Why?  Because she sought treatment for an eating disorder years ago while in college.

Thanks to the governor not naming a board to hear appeals from her, she and thousands of other people stripped of their gun rights without one bit of due process have little real process to reclaim those rights.  So they wait.

News of this has gotten out and some media outlets are picking up on this.

The Center Square was first to investigate after I mentioned this in a radio interview.  They then published this story.

(The Center Square) – There are no members appointed to the board that is set to field appeals from Illinoisans who have had their gun privileges revoked by the state.

Illinois law requires anyone who wants to buy or own guns or ammo to have a valid Firearm Owner’s Identification card issued by Illinois State Police. Gov. J.B. Pritzker said state police have been busy confiscating FOID cards from those the state determines can’t have one…

ISP said earlier this month they have conducted more than 200 FOID enforcement details with more than 1,000 individuals surrendering their FOID cards and weapons.

But John Boch, with the gun-rights group Guns Save Life, said while there’s a FOID appeals board in state statute, the governor has not appointed anyone to field challenges to revoked privileges.

“Governor Pritzker and his friends in the legislature that are leading our state have done a fine job basically taking people’s FOID cards away without any due process at all,” Boch told WMAY.

State law says an aggrieved party can appeal to the ISP director. Starting Jan. 1, 2023, they can appeal to the FOID Card Review Board. The board was created by state statute Jan. 1, 2022. But nobody has been appointed to the board. Pritzker didn’t say why he hasn’t appointed any board members when asked about the issue Thursday.

The bottom line is gun owners in Illinois have good reason not to trust Gov. J.B. Pritzker, and under Pritzker’s leadership, they may not trust the Illinois State Police either.

Fortunately, thanks to the Bruen case coming down, I think we’re going to have a very satisfactory resolution to this mess long before we’re all eating tapioca pudding in a nursing home.

2022-10-01
Previous Post: r/guns – Just picked up this Hi-Standard Double Nine. Can anybody tell me anything about it? I got it cheap but it feels amazing.
Next Post: r/guns – East meets the West